Since being gifted to the United States, The Statue of Liberty has been widely viewed as a symbol of freedom and independence. Say what you will about the French but damn they know how to give a gift right? Merci beaucoup mes chéres.

As a result, Lady Liberty’s become a popular icon who has been regularly featured in pop culture. She can even be considered a bit of a movie star – sometimes, as a background player who barely gets any screen time. Other times, she’s the location of a climatic showdown between good and evil. However, she’s usually being destroyed on film as a way to signal the loss/threat to our freedom. Aliens attacking, again? You can bet your bottom dollar that they’ve got their eyes on our lovely statue.

Here are ten films in which the lovely Lady Liberty has made a memorable appearance.

{X-MEN, 2000} Lady Liberty makes a crucial appearance as the site of the final showdown between Wolverine and Sabertooth

{TITANIC – 1997} After Rose has lost the love of her life and almost everyone she knows, she sees Lady Liberty when the rescue boat pulls into NY after the tragic events.

{WORKING GIRL – 1988} Lady Liberty is the first thing the audience sees in the opening credits to this movie. That and Carly Simon’s Oscar-winning song, “Let the River Run” makes for a memorable intro to this classic triumphant achiever tale.

{GHOSTBUSTERS 2 – 1988} Lady Liberty literally comes to life to help the Ghostbusters team vanquish Vigo the Carpathian. She ain’t afraid of no ghosts.

{SPLASH – 1984} Darryl Hannah as Madison the mermaid comes ashore naked at the Statue of Liberty where she is arrested for indecent exposure.

{SABOTEUR – 1942} Alfred Hitchcock, the King of Suspense uses Lady Liberty as the site of a climatic confrontation.

{THE GODFATHER PART II – 1974} Lady Liberty makes a few appearances in the Godfather movies. However, this shot of a young Vito Corleone staring at the statue while in quarantine is vital in the story of an immigrant family acquiring wealth and power.

{THE PLANET OF THE APES – 1968} In this famous ending, Lady Liberty has been through the ringer, decayed and buried in the sand. She offers proof to Taylor (Charlton Heston) that he has been on Earth the whole time.

{AN AMERICAN TAIL – 1986} Lady Liberty is a symbol of hope and freedom to Fievel Mousekewitz and his family who immigrate from Russia.

{CLOVERFIELD – 2008} Yikes, the Statue of Liberty gets decapitated in this disaster-monster movie. Well, there goes freedom. 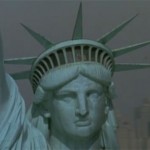 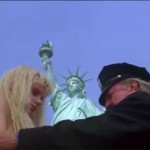 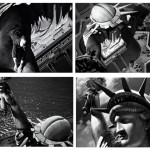 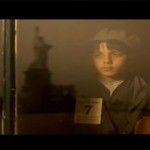 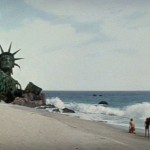 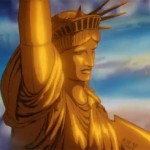 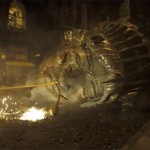 What are some of your favorite film appearances of The Statue of Liberty?