Oh snap! We’re back for another installment of Rewind << so let’s take a little look back at the haute stories circulating the old interwebs this past week.

I know, I know it hurts but dry your tears you lovely little doves.

This is the week that McKayla Maroney’s screw face went viral aka the scowl seen around the world. 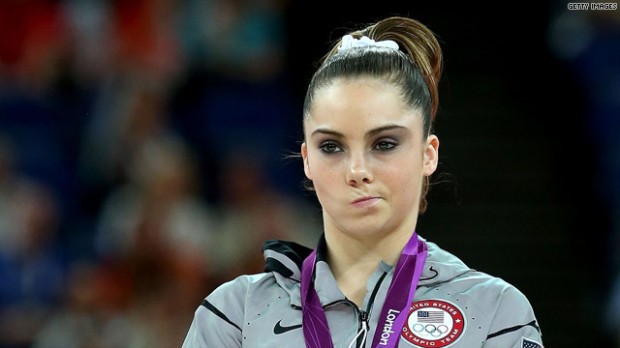 It has since turned into a glorious meme where McKayla is not impressed with anything and I mean anything. Yes, she should definitely be a better sport. I know we’re not supposed to be sore losers but it was one moment of an honest reaction to her own performance – she wanted that gold medal. It’s the Olympics after all.

What I love the most about it is that it’s real. You know when you’re watching an awards show and the nominees are all waiting for their name to be called? Everyone’s sitting, anxiously waiting…anticipating and then the name is announced. The winner walks triumphantly to the stage and the losers all have to sit there, clap and smile like it’s okay.

But it’s NOT okay. You want to win. No one feels great when they lose. Thank you McKayla for your honesty. Next time, hide it a little better.

<< In other Olympic news, let’s talk about Usain Bolt, shall we? 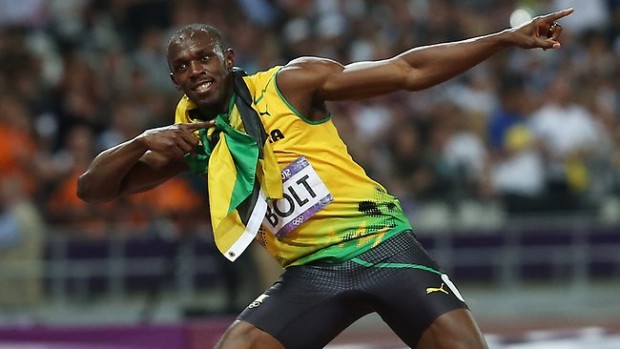 Or better yet, let’s hear Usain Bolt talk about himself. If you didn’t click that link (you definitely should, trust me), here’s a brief transcript:

“This is what I came here for. To be a legend. I’m in no doubt to myself now and I’m sure the world is in no doubt that I am a legend. I made myself a legend this season…

Can we give this man the gold medal in self-confidence already?

Listen, no one can deny that Bolt is an incredible athlete and the fastest runner in the world but he’s definitely been taking notes from the P. Diddy, Kanye West and Donald Trump School of ‘Humility’s for Losers’.

And you know what?

Because when you demolish world records left and right then you can afford to call yourself a legend.

<< Google Doodle. Last week the Google homepage sucked me deep into its vortex. I would have a question that needed immediate answering and there I would be twenty minutes later, with no answers but a pretty decent score in the slalom canoe. Let’s just say a lot of time was wasted playing these interactive Olympic games.

<< Samuel L. Jackson was tweeting about the Olympics and it gave me so much life this week. Sammy L. is like your crazy, drunk uncle that shows up at the yearly family BBQ and has jokes and commentary for everything. You’re not even embarrassed to bring him around friends because he is universally liked in all his cray-cray ridiculousness. 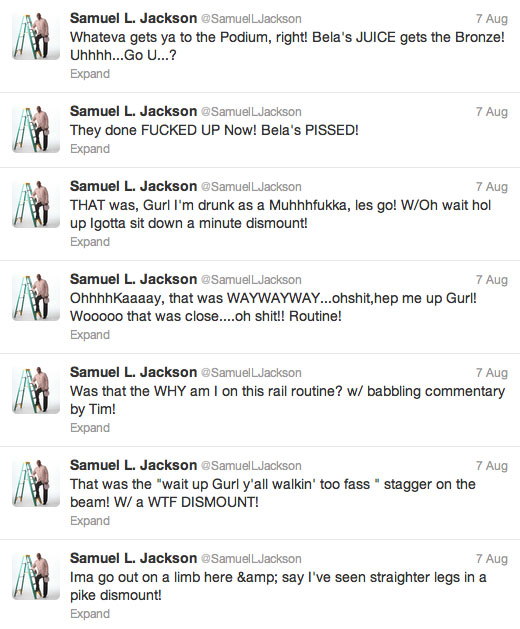 << Let’s pause for a minute and talk about Iggy Azalea.

I go back and forth on how I feel about Iggy as a rapper. I applaud anyone especially a woman who is on her hustle and making things happen for themselves. But sometimes, if I’m being honest, her style is a major factor in why I like her as much as I do. BIG fan of her style.

Whatever it is, here is a quick interview with Miss Iggy while she gets her nails did.

It is the epitome of campy ridiculousness with lots of hot ass men running around. Swoon.ing.

It’s so over the top and I really don’t know how many more supernatural storylines they can cram into an hour but it’s my Brokeback Mountain. It’s the Jack to my Ennis. I can’t quit it. And, you know what? I don’t want to.

I’m well aware that most of us fans have our favorite characters. Eric, Bill, Pam, the whole cast, etc. And while, I will always pledge allegiance to a certain sexy, violent Swedish Viking –

I do have a soft spot for Alcide Herveaux. Let’s hear it for the werewolf! So, imagine my surprise during last week’s episode when they did a flashback to a young Alcide and this face popped onto the screen. 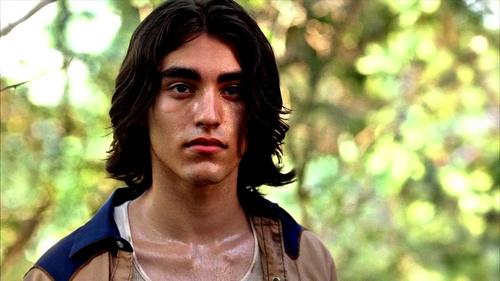 My very first thought was: ‘Whoa, who is this pretty motherf*@ker?!’ Second thought: ‘Why is he so sweaty? No one else in this scene is that sweaty?’ Third thought: ‘So Alcide never had an ugly duckling, awkward moment? How is that possible?!’ Fourth thought:

Listen up, Alan Ball! All the men in Bon Temps can’t be so good-looking. Quit playing games with my heart.

Alright, that’s a wrap. Until next week.

P.S. The Spice Girls reunited for the Olympics Closing Ceremony. Spice up your life!

That’s a smart answer to a diifcfult question.

Debbie I have tried to make certain albums private too, Fiona – there is even an ‘edit album privacy’ button on individual photos, but this only allows you to edit the text, not the privacy! Really annoying as I wanted to create a private album for a competition and didn’t want to publish it till all entries were submitted, but it seems all business page photographs have to be ‘public’, grrrr

It was most likely superuser that was causing the issue. The 3.x versions have been giving people all kinds of trouble. Chains is doing his best to resolve them. Most likely clearing the data/cache from the superuser app itself would have resolved it too.