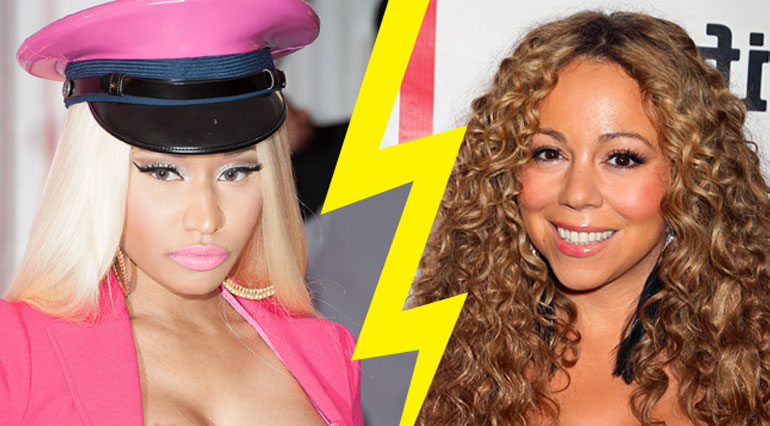 Welcome back to Monday which means another installment of Rewind. This is where we take a look at all the haute stories from the previous week.

<< Okay, let’s just jump into the hot mess of a situation that is Nicki Minaj and Mariah Carey on American Idol. Now when I first heard the news that Mariah Carey would be a judge on AI, I honestly thought it would be a breath of fresh air. Mariah would add a bit diva ridiculousness (just enough to keep us entertained) but with a dash of real advice – seeing that she is a music industry veteran. When Nicki Minaj was announced as a judge, I barely shrugged my shoulders and kept it moving. Then video was released of Nicki Minaj having a fit over some “creative differences” with Mariah Carey.

It tires me to even have to write this but I’m over it all. Listen, you can have disagreements and what not but really at the end of the day these are GROWN folks getting paid MILLIONS of dollar to act the damn fool. Enough already. These shows have become all about the judges instead of the actual talent and do we really need to shine the pop culture spotlight on more of these “celebrities”?

Then later in the week Nicki Minaj took to Twitter (what is it about those 140 characters that makes people want to spill their souls?) to further share her feelings by responding to a false tweet from Da Brat who Nicki thought was defending Mariah. Once the tweet had been found to be fake, Nicki returned to twitter (again) to apologize to Da Brat.

<< To say this past fashion show season has been filled with twists and turns is a bit of an understatement. It’s been downright catty. Now, the fashion industry has always been filled with egos, extraordinary talents and megalomaniacs but with the rise of social media, everyone seems to be airing their dirty laundry left and right. This past week, the beef between designer Hedi Slimane and New York Times writer Cathy Horyn went to the next level.

Long story short, ever since Hedi Slimane was appointed to Yves Saint Laurent and decided to drop the Yves, etc, etc. – there’s been some serious anticipation to his debut collection as the Saint Laurent designer. Apparently, he’s been pitted against Raf Simmons (the newest designer for Dior also scheduled to debut this season) in some sort of fashion designer celebrity showdown. It seems that Hedi Slimane has felt that Cathy Horyn has been kinder to Raf Simons over the years when both Simmons and Slimane were noted menswear designers.

Are you keeping up? Is it making any sense?

Anyway, Cathy Horyn was not invited to the S/S 2013 Saint Laurent Paris collection, and wrote a critique about the show that upset Hedi Slimane so much that he wrote an open letter and posted it to twitter! Click to enlarge. 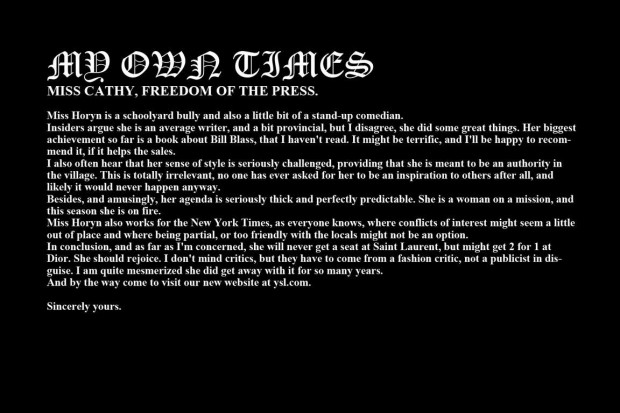 Now, I realize that no one either wants or likes a bad review but really? Really?

Even Audrey Hepburn can’t believe it.

What is going on in the world that ADULTS think that this is the right way to react to unpleasant situations? We’re all entitled to our feelings but there has to be better ways to get our point of view across. Here’s hoping that everyone settles down by next fashion show season.

<< In news that will make you feel old, you guys, Clueless is 17 years old. Seventeen. Like the magazine. Like a hormonal teenager. Like the age of the characters in the film. Like a senior in high school, getting ready to start applying to colleges and dreaming of living on its own and not having to worry about curfew.

I don’t care how many years pass, Clueless will remain one of my favorite movies and I have no shame in dropping a quote into conversations when necessary. Which is more often that you think. And if you think I’ll ever stop quoting it, I’ve got two words for you. As if. 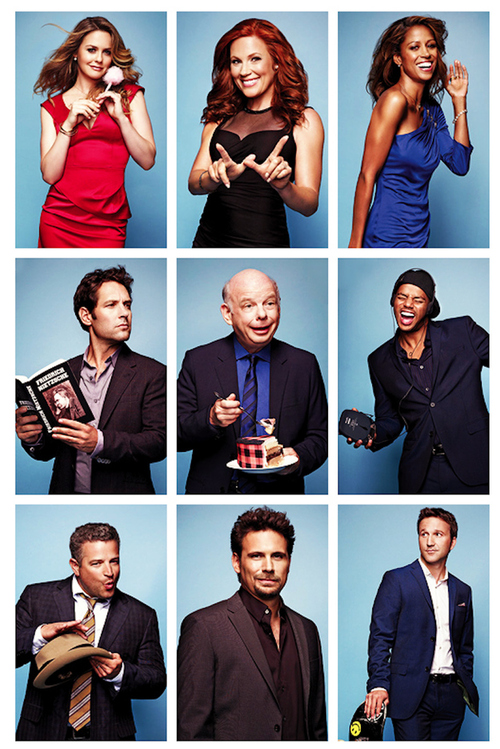 Here’s a little video of the reunion.

<< Btw, last week Brooklyn hometown hero, Shawn Carter aka Hov aka Jay aka Jay-Z opened the Barclays Center with a series of eight shows. On Sat, Jay decided to take the train to Brooklyn for his eighth and final performance. Watch what happens.

<< Finally, let’s chat about Solange’s newest video for Losing You and how much I’m loving not only the song but all the visuals. The beat, the muted yet vibrant colors – it’s all a home run in my opinion.