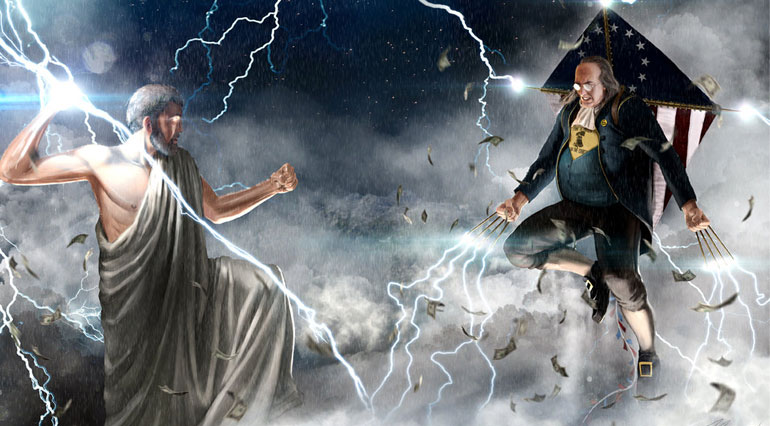 Most of us know the story of good ole Benjamin Franklin whose constant curiosity led to some of the biggest inventions and discoveries including that lightning is electrical by nature. Apparently, Ben went out one dark and stormy night armed with a kite with a metal key attached to it and poof this led to him inventing the lightning rod.  Which is….?

The lightning rod provides the path of least resistance for electricity to travel from from the air to the ground. Ummm, okay.

There is the myth that Benjamin Franklin discovered electricity which is NOT true. Electricity had already been around for awhile before Franklin became interested in it and started conducting experiments. Harnessing electricity has become essential in the way that we power our modern lives. How do you think batteries work? Or your tv? We live in a world where most of our conveniences are dependent on electrical currents.

Anyway, wouldn’t it be more fun to think of Ben Franklin acquiring the secrets of electricity in an epic duel with Zeus? That’s exactly what the artist Jason Heuser aka sharpwriter thought when he created the image above. Here is the inspiration for his this piece of art.

I don’t know about you but that sounds pretty cool. Prints of this painting and other historically altered works of art can be found in Jason Heuser’s etsy store.

What a timely bit now! Thank you a lot for such a great post.
How can you find numerous facts? I enjoy how that you arrange everything, because it’s
truly easy to read. All in all, I will recommend this article to
everyone who is interested in that topic.