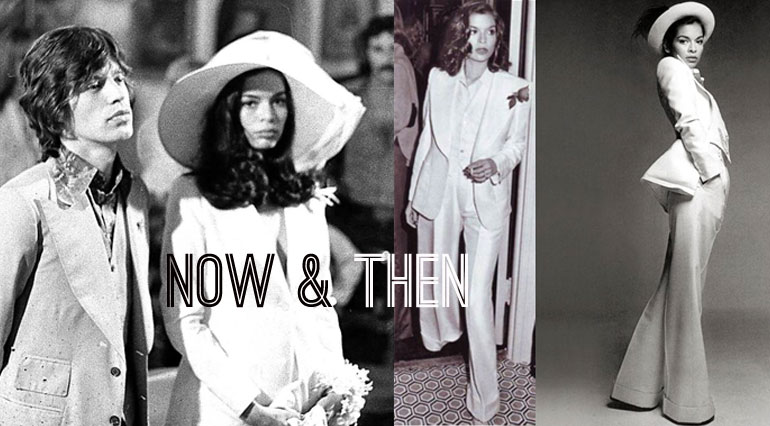 Since I draw so much inspiration from images from decades past, I knew I wanted a new series on StyleAlchemy that would explore and create outfits for NOW based on events that happened back THEN. Boom, there you go, NOW & THEN. 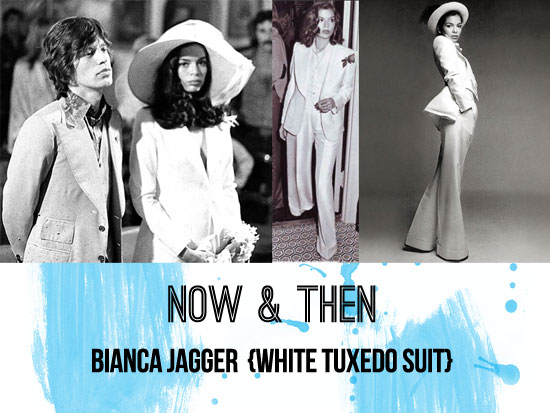 Without a doubt, Bianca Jagger is considered a style muse to many. She had a unique way of dressing with a sense of drama and glamour that never seemed to be over the top. Even when she showed up to her birthday party  at Studio 54 astride a white horse, she wasn’t dripping in diamonds and wearing some elaborate ensemble. Instead, she wore a lovely, off the shoulder drapey gown. Elegant, simple but she was still riveting.

The same could be said for her wedding dress to Mick Jagger. It was simple in concept but spoke volumes in style. She wore a white YSL skirt suit with no bra or shirt underneath and an enormous floppy white hat. In fact, the white tuxedo pant suit could be considered one of Bianca’s trademark in the 1970’s.

So, I wanted to imagine an outfit that relied heavily on Bianca Jagger inspiration but would be new and fresh for Spring. Which means I didn’t just want any traditional white suit – sooo why not a short suit? Since my gams would be out in full force, I felt that a drapey top underneath a well-tailored jacket would keep things classic and classy. The tie at the neck gives a vintage nod to the past while the loose fit of the shorts keeps things a little more modern. I wanted silver metallics in the accessories to add a bit of drama but gold would work just as well. Top it off with a dark, vampy lip, neutral eye makeup and of course, an enormous white hat to complete the look. Voilà. 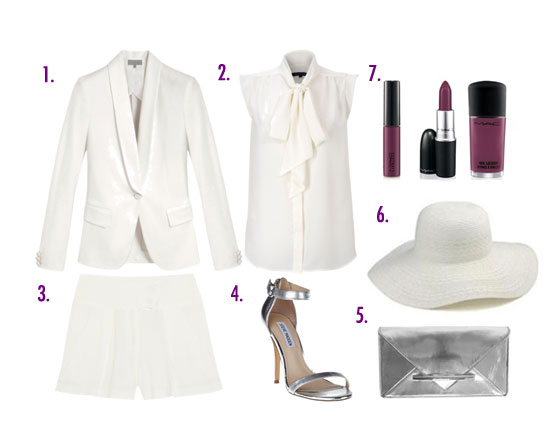 Thank you for bringing up this topic. I was searching for up to date information on this subject for a few days.
Now I am satisfied as I have finally reached your article.

I enjoy the way you present and argue all the facts in addition to your
overall writing style. From time to time, there’s a shortage of
time to read lengthy bits, but is brief and concise, I spent only a few minutes
to read the whole article. It’s essential, since no one has the time to browse.